Pigweed
Back to top

This guide will walk you through the typical upstream development workflow.

This documentation and the sample project show how to use Pigweed as a library in your existing project. Using Pigweed as the foundation for new projects is our intended use case, but you may need more guidance than this documentation provides to do that right now.

We’re happy to help you get your project setup; just drop in our chat room or send a note to the mailing list.

If you’d like to skip the detailed explanations, below is the shorter version of getting setup for Pigweed. If you run into trouble, look at the more in-depth guide below, starting at Prerequisites. The express setup configures Pigweed’s watcher for three targets to give a taste of Pigweed:

See below for equivalent Windows commands, and for more details on what each part does.

Note: After running bootstrap once, use source ./activate.sh (or activate.bat on Windows) to re-activate the environment without re-bootstrapping.

Most Linux installations should work out of box, and not require any manual installation of prerequisites beyond basics like git and build-essential (or the equivalent for your distro).

To flash devices using OpenOCD, you may need to extend your system udev rules at /etc/udev/rules.d/. The OpenOCD repository has a good example udev rules file that includes many popular hardware debuggers.

To start using Pigweed on MacOS, you’ll need to install XCode. Download it via the App Store, then install the relevant tools from the command line.

On macOS you may get SSL certificate errors with the system Python installation. Run /Applications/Python <default_py_version>/Install Certificates.command to fix this. If you get SSL errors with the Python from Homebrew try running the following commands to ensure Python knows how to use OpenSSL.

To flash firmware to a STM32 Discovery development board (and run pw test) from macOS, you will need to install OpenOCD. Install Homebrew, then install OpenOCD with brew install openocd.

To start using Pigweed on Windows, you’ll need to do the following:

If you plan to flash devices with firmware, you’ll need to install OpenOCD and ensure it’s on your system path.

Once you satisfied the prerequisites, you will be able to clone Pigweed and run the bootstrap that initializes the Pigweed virtual environment. The bootstrap may take several minutes to complete, so please be patient.

Below is a real-time demo with roughly what you should expect to see as output:

Congratulations, you are now set up to start using Pigweed!

After going through the initial setup process, your current terminal will be in the Pigweed development environment that provides all the tools you should need to develop on Pigweed. If you leave that session, you can activate the environment in a new session with the following command:

Some major changes may require triggering the bootstrap again, so if you run into host tooling changes after a pull it may be worth re-running bootstrap.

Pigweed’s primary build system is GN/Ninja based. There are CMake and Bazel builds in-development, but they are incomplete and don’t have feature parity with the GN build. We strongly recommend you stick to the GN build system.

GN (Generate Ninja) just does what it says on the tin; GN generates Ninja build files.

The default GN configuration generates build files that allow you to build host binaries, device binaries, and upstream documentation all in one Ninja invocation.

Run GN as seen below:

Note that out is simply the directory the build files are saved to. Unless this directory is deleted or you desire to do a clean build, there’s no need to run GN again; just rebuild using Ninja directly.

Now that we have build files, it’s time to build Pigweed!

Now you could manually invoke the host build using ninja -C out every time you make a change, but that’s tedious. Instead, let’s use pw_watch.

Go ahead and start pw_watch:

When pw_watch starts up, it will automatically build the directory we generated in out. Additionally, pw_watch watches source code files for changes, and triggers a Ninja build whenever it notices a file has been saved. You might be surprised how much time it can save you!

With pw watch running, try modifying pw_status/public/pw_status/status.h and watch the build re-trigger when you save the file.

See below for a demo of this in action:

Fun fact, you’ve been running the unit tests already! Ninja builds targeting the host automatically build and run the unit tests. Unit tests err on the side of being quiet in the success case, and only output test results when there’s a failure.

To see a test failure, modify pw_status/status_test.cc to fail by changing one of the strings in the “KnownString” test.

Running tests as part of the build isn’t particularly expensive because GN caches passing tests. Each time you build, only the tests that are affected (whether directly or transitively) by the code changes since the last build will be re-built and re-run.

Depending on your host OS, the compiler will default to either clang or gcc.

Building for a Device#

A Pigweed “target” is a build configuration that includes a toolchain, default library configurations, and more to result in binaries that run natively on the target. With the default build invocation, you’re already building for a device target (the STMicroelectronics STM32F429I-DISC1) in parallel with the host build!

If you want to build JUST for the device, you can kick of watch with:

This is equivalent to the following Ninja invocation:

Running Tests on a Device#

Connect any number of STM32F429I-DISC1 boards to your computer using the mini USB port on the board (not the micro USB). Pigweed will automatically detect the boards and distribute the tests across the devices. More boards = faster tests! Keep in mind that you may have to make some environment specific updates to ensure you have permissions to use the USB device. For example, on Linux you may need to update your udev rules and ensure you’re in the plugdev and dialout groups. 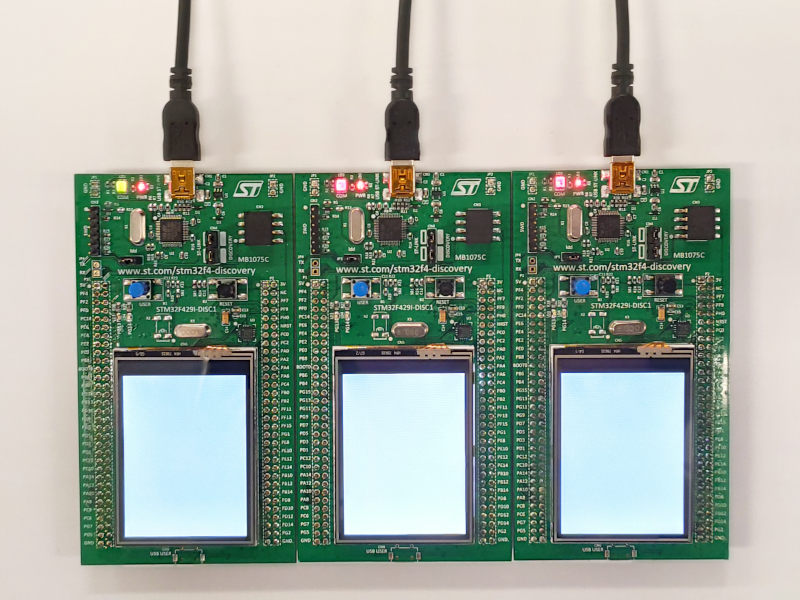 To allow Ninja to run tests on an arbitrary number of devices, Ninja will send test requests to a server running in the background. Launch the server in another window using the command below (remember, you’ll need to activate the Pigweed environment first).

Note: If you attach or detach any more boards to your workstation you’ll need to relaunch this server.

Tell GN to use the testing server by enabling a build arg specific to the stm32f429i-disc1 target.

Note: There are several additional dependencies required to test on device: libusb-compat, libftdi, and hidapi at the time of writing. On MacOS, these dependencies should be installed to the default homebrew location: /usr/local/opt/.

Whenever you make code changes and trigger a build, all the affected unit tests will be run across the attached boards!

See the demo below for an example of what this all looks like put together:

In addition to the markdown documentation, Pigweed has a collection of information-rich RST files that are used to generate HTML documentation. All the docs are hosted at https://pigweed.dev/, and are built as a part of the default build invocation. This makes it easier to make changes and see how they turn out. Once built, you can find the rendered HTML documentation at out/docs/gen/docs/html.

You can explicitly build just the documentation with the command below.

This concludes the introduction to developing for upstream Pigweed.

Sometimes it’s faster to incrementally build a single test target rather than waiting for the whole world to build and all tests to run. GN has a built-in tool, gn outputs, that will translate a GN build step into a Ninja build step. In order to build and run the right test, it’s important to explicitly specify which target to build the test under (e.g. host, SM32F529I-DISC1). This can be done by appending the GN path to the target toolchain in parenthesis after the desired GN build step label as seen in the example below.

The .run following the test target name is a sub-target created as part of the pw_test GN template. If you remove .run, the test will build but not attempt to run.

In macOS and Linux, xargs can be used to turn this into a single command:

Check out other modules#

If you’d like to see more of what Pigweed has to offer, dive into the Module Guides.

Check out the sample project#

We have a sample project that demonstrates how to use Pigweed in your own project. Note that there are many ways to leverage Pigweed and the sample project is one approach.

Check out the Hackaday Supercon talk about Pigweed#

We gave a talk at Hackaday’s 2021 supercon, Give Pigweed a Whirl

We’ve made improvements since we gave the talk; for example, we now have RTOS primitives.

Set up Pigweed for your own project#

We don’t yet have thorough documentation for leveraging Pigweed in a separate project (our intended use case!). The sample project shows how to use Pigweed as a library in your broader project, but you may need further guidance.

Dropping into our chat room is the most immediate way to get help. Alternatively, you can send a note to the mailing list.